Mr. Dude aka Dood, my Companion

I got an idea to buy a dog ever since I saw videos of golden retrievers. I was attracted to their cuteness, cleverness and beauty. 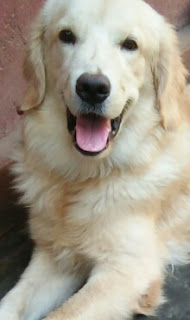 The golden retriever is an athletic dog and they are strong. They were named 'retriever' because of their ability to retrieve shot game undamaged due to their soft mouth. Golden retrievers have an instinctive love of water, and are easy to train to basic or advanced obedience standards. They are a long-coated breed, with a dense inner coat that provides them with adequate warmth in the outdoors, and an outer coat that lies flat against their bodies and repels water. Golden retrievers are well suited to residency in suburban or country environments. They are capable of carrying heavy game over land and water. For this, they need a broad powerful neck and well developed fore and hindquarters. It is just slightly longer than tall. The gait is powerful, smooth and ground covering. They live with their owner and sleep with them. They are intelligent and friendly. They are also cute. (information from Wikipedia)

Therefore, when we moved to our own village I thought to have one of them and I did. We got him as a present from my father's friend, Vinod uncle who is also a dog trainer. We named him Dude 😋. The pronunciation in Malayalam is Dood. We got him when he was 43 days old. He was born on March 26, 2018. His father's name is Romeo and his mother's name is the Winner. He was a cute little puppy who loves to put head outside the car and enjoy the fresh air.
Vinod uncle has a golden retriever named Hunky. Unfortunately he is deaf, but at the same time, he is intelligent. Hunky is a champion. My pet Dude is also having a gene of his parents and grandparents who were champions as well.

We got him on the day when my father was coming from Saudi Arabia on his vacation. Vinod uncle had brought him to the airport. After we took him we went to my Perasyamma’s home because we have not raised a puppy. They had experience of raising puppies. Their daughter is a big fan of animals so we asked her for help.

I remember, that day was a rainy day. Whenever we opened the car window, he would lick the rainwater with his tongue. In the evening, we bought him to my home. My grandparents were surprised because they did not know that we would bring a puppy. After a few days, they got attached to him. They started to play with him.

He loves tennis ball. Whenever we give him a tennis ball, he will not give it back. If we try to take it back, he starts to look us in a strange playful way. Dude is so friendly and helpful. He is having an adventurous soul. He never fails to make us laugh.

The first time when we brought him home, he ate the dog food but when he started to grow up, we gave him rice, dosa, podiyari kanji, etc. To be honest he eats every single food that we give.

When we first put him to the ground, he ran to the gate and went outside. I was afraid of the vehicles running there on the road and ran after him.
My mother was not at all interested in dogs. However, when we got him she started loving him. When Muthasyamma starts to make dosa early in the morning, he will crawl on the window and stand up to sniff. When Muthasyamma comes out of the kitchen and stand near its cage at car porch, immediately he will look at Muthasyamma with a hopeful eye because he does know that early morning first dosa will go for him. If Muthasyamma did not give him a piece of dosa he will start crying.

My Valyachan used to play with him every single day. Whatever he eats he will give to Dude. Actually, he had made everyone happy. Now in my village, we are well known as Dood’s (as they pronounce in Malayalam) family.
We do not know what we would have done without him. He had become a big part of our life and a member of our family. He does know how to get things from us; also, he knows how to get attention from us. We are so thankful to have him in our life. Even though my relatives are afraid of him, they all started to love him now. He had made them fall by his cuteness.
Now Vinod uncle is training him, while we are here on vacation. I really miss him a lot and every other day, I ask Vinod uncle to send photos or videos.
I do suggest you to buy a pet and give them a chance whether you like it or not. Because they will help us in any situation.

I am the proud owner of my companion Dude.